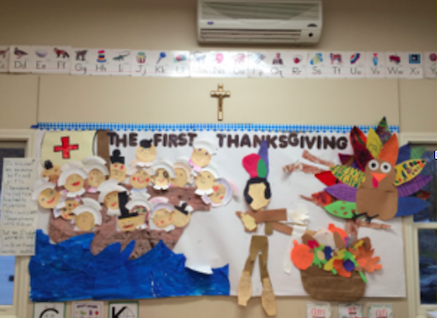 Thanksgiving is just around the corner and, with it, a perfect time to reflect on the blessings God has given us throughout the year.

During this holiday season, the Kindergarten class participated in activities focused on gratitude and how to be thankful for what we have been given.

Students learned that the Pilgrims left England because they could not pray freely. Yet they risked a dangerous journey from their homeland for religious freedom. There was little room on the Mayflower and the Pilgrims could only bring a few belongings.

The first activity I asked the class to complete was to draw and write what they would bring on the Mayflower.

Some responses were: the Bible, cheese, a blanket and “my favorite stuffed animal.”

Next, students learned that Pilgrim children had many chores. Each student wrote a sentence about a pilgrim chore and collaged a picture to match!

Some of the chores were:

My pilgrim is feeding the chickens.

My pilgrim is setting the table.

My pilgrim is getting water from the well.

My pilgrim is getting fire wood.

My pilgrim is washing the clothes.

Next, we had fun making and sharing pumpkin bread!

We ended our Thanksgiving unit with Gratitude centers.

Center 1: Making butter! The class experienced the process of making butter by shaking cream in little jars.  The focus was placed on the difficulty of having to make one’s food compared to ‘buying’ it from a store. It was hard work!

Center 2: Students drew and wrote what they are thankful for. The focus was placed on all that the Pilgrims and Native Americans had to do in order to survive and not taking for granted all that we have been given. Students made a class book to go along with this center.

Centers 3 and 4: Pilgrim toys and Native American games- We talked about what toys we like to play with and where we get our toys from. The focus was placed on the hardships the Pilgrims had in making everything from scratch, including toys.

We then made a toy called “ring on a stick.” We also played a game taught by the Native Americans – star and moon rock game and a game using beans.

During this Thanksgiving week, let us truly celebrate and express gratitude for all that we have been given and all that we can share like the Pilgrims and like our Kindergarten students!