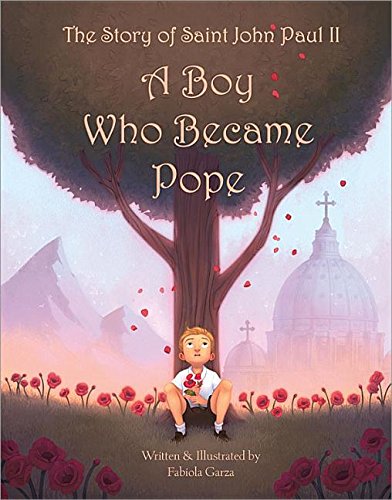 I have a healthy obsession with Saint Pope John Paul II. Maybe it is because my parents are both immigrants from Poland, or because of his inspiring teachings on Theology of the Body, or because I was studying to be an actor before joining the SBCA community. The influence JP2 has had on my life is unparalleled. His feast day is October 22nd and I hope on that day many people remember to celebrate this incredible human being.

Before becoming Pope John Paul II, the first non-Italian pope, his name was Karol Wojtyla and he grew up in Poland. It is perhaps this fact of his Polish upbringing that contributes to the visceral Polish pride among Poles. Karol’s life was full of suffering and loss at an early age. He lived through World Wars I and II and communism, and lost his mother when he was eight years old and brother when he was 12. When his father was alive, he would often find him on his knees in prayer. (I hope this fact can inspire parents, especially fathers, to pray in front of your kids. Who knows, maybe someday they could become Pope, too!)

In Poland, young Karol studied to become an actor and wrote plays; he would have clandestine performances to inspire the Polish people and give them hope during challenging times. When I was studying acting in NYC, I would often think about JP2 and wished I could meet or work with someone like him. I found it very lonely studying acting in a secular, nearly anti-Catholic, place, and am so grateful to now have the SBCA community here in Massachusetts! It has kept me sane ever since graduating and I am so humbled that I can still keep my love for theater alive by directing the after-school plays here at SBCA. I believe theater is so important and can improve the world. The world needs more Catholics in theater!

One day when young Karol came back home, he discovered that his father had passed away, and shortly after he realized that he was called to be a priest. Some people tried to discourage him from his vocation because of how dangerous being a priest was at the time. They thought he would make a bigger difference in the world by being an actor and playwright. Ultimately, Karol followed his call from God, was ordained a priest, and later became a cardinal.

When he was Cardinal, he wanted to build a church in Nowa Huta, an area in Poland near Krakow. After two decades of planning, negotiating, and fighting to get this church, it was built. Over the summer, I visited the church and there was an incredible depiction of the stations of the cross where the people in the painting looked like traditional Polish people and made me think about the stations of the cross in a completely new way. I saw myself in some of the pictures and it was a very contemplative experience. I highly recommend visiting there.

When he was voted Pope, the national pride in Poland was very moving. People were overjoyed, but also nervous because Poland was communist and it could be dangerous. JP2’s famous saying was “Do not be afraid!” What we do at SBCA seems radical in this secular world, but we must never be afraid.

I could go on about JP2, but no amount of words would suffice to encapsulate this profound person. To teach your family about JP2, I highly recommend getting the book, “A Story of St. John Paul II: The Boy Who Became Pope”. Every time I read it to my Pre-K students, I get tears in my eyes, because I am very in touch with the emotions and pride I experience by being uber-Polish, and just because of how inspiring JP2 truly is. Pope Saint John Paul II, pray for us!

“Remember that you are never alone, Christ is with you on your journey every day of your lives! He has called you and chosen you to live in the freedom of the children of God. Turn to him in prayer and in love. Ask him to grant you the courage and strength to live in this freedom always. Walk with him who is ‘the Way, the Truth and the Life’!” – Pope John Paul II