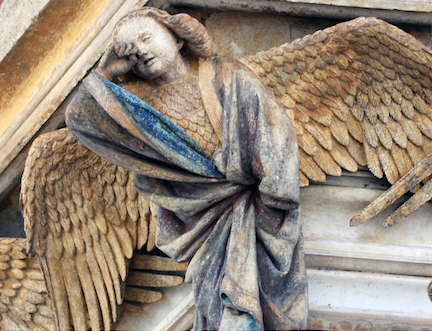 The art produced during medieval times offers endless awe and inspiration. Medieval sculptor, Claus Sluter, was commissioned to build a monument to evoke these same feelings with his “Well of Moses”. Philip the Bold, the Duke of Burgundy, assigned him to sculpt this hefty monument serving as a source of inspiration for meditation and prayer. It was the centerpiece of a Carthusian monastery that monks could view from their prayer cells. The hexagonal pillar, which at one time included a cross, features six prophets standing on each side. Slender corinthian capped columns hoist weeping angels with outstretched wings. Some hold their faces, wring their hands or clutch at their chest.

Artists at St. Benedict Classical Academy were asked to create their angels with impassioned expressions. We looked at the deeply carved folds of their robes, how they held their hands against their faces, and the details of their golden wings.

While hanging the Pre-Kindergarten’s and Kindergarten’s angels on the wall outside of the second grade class, an older student stopped and took note that not one was crying. They all seem to smile and laugh. It is no surprise that the youngest students chose not to let their angels shed a tear.

During this medieval month of art, students have also worked on gothic cathedrals that illustrated pointed arches, flying buttresses and colorful rose windows. Younger students had fun with metallic paints and sponges used for printmaking stone facades on castles with drawbridges. Fifth and sixth grade artists continue to work on illuminated letters. Our fourth grade illustrators have been given reign over the bulletin board in Gregorian Hall to establish a cut paper medieval village. They are adding homes, places of business, animals and trees. They were directed to select occupations common in medieval times. Storefronts include a butcher, a bakery, a school for falconry, and grocery store. Knights and kings charge about with flags claiming castles on the hillsides.

If you need a pick-me-up over this busy season, draw upon these young artist’s bottomless well of joyful creativity.