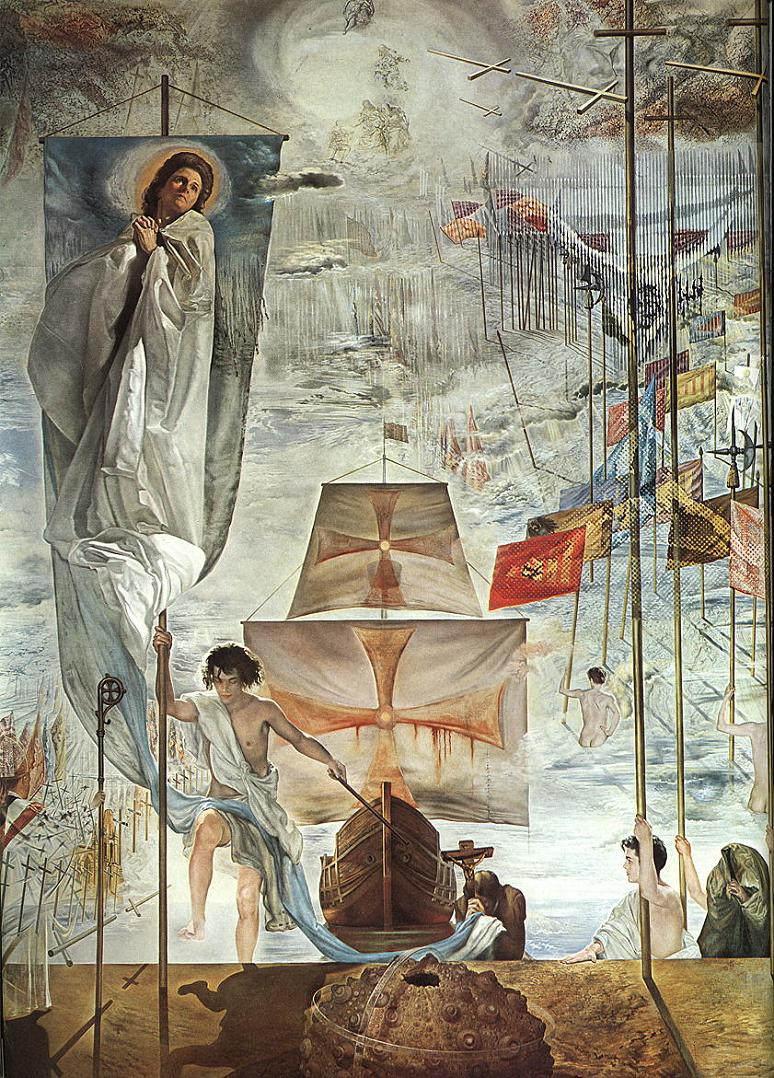 Yesterday I discovered a painting by Salvador Dali that I had never seen before. No outlandish mustaches or melting clocks, but this painting, The Discovery of America by Christopher Columbus, showcases Dali’s ethereal and unmistakable style. Dali is by no means considered, least of all by himself, a Catholic painter. And yet he chose to depict this historical event with clear focus on the Catholic faith: big crosses, a man, possibly a monk, holding a crucifix in the background, a figure which could be the pope in the bottom corner, and a massive banner featuring the Blessed Virgin Mary show Dali eschewing historical accuracy for an intense focus on religious symbolism. Indeed, produced during a period of profound interest in the Catholic Faith, this painting points the viewer to a consideration of the role of Christopher Columbus and the Faith in American history.

It might seem silly to say that we even have a need to consider the role of Christopher Columbus in American history. After all, every American can tell you “In 1492, Columbus sailed the ocean blue,” but this oft-quoted line reveals the limits most Americans’ understanding of Columbus’ role. Students learn about Columbus and a hodgepodge of Portuguese, Spanish, and Italian explorers before jumping to the English settlements and colonies— ironic, given our contemporary obsession with multiculturalism. This jump stems from a common historical narrative that after the Spanish Armada fiasco in 1588, Spanish influence in America, besides a few blips, took a 400 year hiatus until the twentieth century.

To be fair, the Spanish Armada delivered a great loss to Spain, and the story of the English colonies and their relationship with the crown form much of American political history. Yet if we are seeking to envision, like Dali, the bringing of Catholicism to America, we must remember the Spanish New World.

Taking our cue from the Spanish Armada and focusing on Spain and England, saving France for another day, Maryland makes a tempting objection to this claim that we should focus on Spain’s role in America to find Catholicism in the New World. Certainly, we cannot snub Maryland; given to Lord Baltimore by Charles I in 1632 as a proprietary colony, Maryland was to be a Catholic haven among the colonies following the wake of the absolute chaos and upheaval of the English Reformation of Henry VIII through Elizabeth I. Yet Catholics in this Catholic colony were soon greatly outnumbered, and across all of the colonies existed an intense division among the different Anglo-Protestant settlers and the Catholics. At times this division reached a boiling point: Maryland’s famous Toleration Act was revoked under Oliver Cromwell and permanently repealed in 1692 following the Glorious Revolution. So severe was the animosity that many cannot believe a Catholic, Charles Carroll of Carrollton, signed the Declaration of Independence.

Despite a smattering of remarkable individuals, Maryland Catholics continued to struggle nobly, yet theirs is the story of bringing the Gospel to the New World. To find that story, we must return to Dali. For in Dali’s painting, steeped in sacred imagery, we see Columbus carrying the banner with the Blessed Virgin Mary, sailing the Santa Maria to the shores of the New World. There he found circumstances most well suited to carry out King Ferdinand’s great wish: “the conversion [of the Natives] to the holy faith of Christ,” as Columbus himself wrote.

Surely, things were not perfect in New Spain; not every conquistador was a saint. Yet the Spanish king sent his explorers out with the hope of spreading the Gospel. Columbus was the first in a long line. He paved the way for figures like Bartolome de Las Casas and Bl. Junipero Serra and the Spanish missions, Spain’s quiet and enduring presence in America.